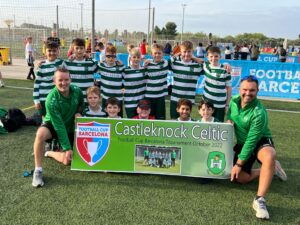 The long-awaited Castleknock Celtic under-12A trip to Spain took place at Halloween weekend when 12 excited players and 12 equally excited parents made their way to Dublin Airport for their early morning flight.

Led by coaches Rav Lalloo and Ciaran Kelly, the team flew out to the last Football Cup Barcelona event of the year.  Matches took place at the state-of-the-art facilities at Football Salou, where teams from all over Europe met for a great weekend of sport in the Spanish sun.

Day one of the competition saw the Castleknock team straight into the action, with games against Swedish, Irish and Spanish opposition.  Goals from Ethan Cunningham, Ryan Kelly, Rory Ward, Andrew Soliman and Luke Carew helped the team to two wins in their first three matches, and there was a great team effort against some quality opponents.

Goalkeeper Dan Murphy was in top form between the posts, making some superb saves and commanding his area well against some talented attacking sides.

On the wings Ryan Kelly, Ethan Lalloo and Conor Dooley worked their socks off, with their excellent passing and great crossing giving Castleknock a major threat going forward, while Rory Ward and Ethan Cunningham made a great partnership in the centre.

Day two also saw some cracking matches.  Pick of the bunch was a seven-goal thriller against the Spanish side Jesus i Maria FC.  Rory Ward picked up two first-half goals, including a great header when Ethan Cunningham’s free kick crashed back off the crossbar.  Ryan Kelly then scored the goal of the game, finishing off a brilliant CCFC passing move with a neat strike, again assisted by Ethan Cunningham, who dribbled beautifully past two players in the build-up.

Sadly, Castleknock just got squeezed out 4-3 at the end of that match, but Rory’s two goals put him in contention for the top scorer prize in the overall competition, and his final total of six goals saw him come in second at the finish.  No Golden Boot this time!

It was a magical two days of football against excellent opposition and it was a happy team and coaches who went up to collect their trophy on the podium at the finish – cheered on by their proud parents.

Off the football field, the squad and parents stayed at the beautiful Cambrils resort nearby, where great fun was had by all.

One of the highlights of the weekend was the trip to Barcelona FC’s Camp Nou stadium on the Monday, where the CCFC team got to walk in the footsteps of some of their footballing heroes – and pick up a Barcelona jersey and some quality merch while they were at it!

All in all, it was a brilliant experience for the squad and one they will remember for all of their days.  The parents would like to thank Rav and Ciaran for a superbly organised trip and for all their hard work, dedication and enthusiasm with the boys over the years, not forgetting the great efforts of fellow coach Jordan Swords in the past year.  It is very much appreciated.

Long-time team member Liam Forrester was not free to make this trip but hopefully he will be first in line for the next one.  No whispers of a return to Spain just yet, but you never know… 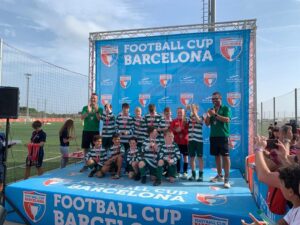