Our minds went back to the great Liverpool European nights in the 1970’s and super sub Davy ‘the Carrot’ Fairclough. Well this Lummy O’Reilly cup semi final revived those memories. The fixture brought together former FAI Cup finalists St Francis and our own Castleknock Celtic, both currently playing in the 1B division of the Leinster Senior League. The Saints have secured promotion this season and must have started favourites.

Celtic were in their changed strip of yellow shirts and were looking second best for the opening quarter, riding their luck at times. They did press forward, with Niall Conran threatening on the left, and they went close with a couple of efforts including one from 25 yards by Joey Crampton. On 20 mins, the ever-industrious Chris Whelan twisted inside but was obstructed by Dave Long, Francis’s centre back, who got booked for his unparliamentary protest. Less than a minute later, the upset was on the cards as Cillian Daly curled a beauty into the top left hand corner, giving the keeper, Kevin McCormack no chance. The Saints went close to equalising on 26 mins when Paul Caffrey brought out a splendid save from Celtic keeper, Paddy Dunne, diving bravely to stop at his near post. Celtic were again called into action on the blow of half time when they managed to scramble the ball off the goal line. So Celtic managed to maintain their advantage and led 1-0 at the break.

St Francis came out envigorated for the second half and were threatening to gain parity. However, it was Celtic who went closest in those opening minutes when Dave Costello gained possession from a sloppy clearance, but the Francis’s keeper redeemed himself with his save. St Francis pulled level on 56 mins when a perfect ball from the left found Ryan O’Callaghan who volleyed in at the far post, a beautiful finish. 1-1

On 60 mins, it looked like St Francis would go ahead, but the striker incredibly scooped it over with the goal at his mercy. 10 mins later it was Chris Whelan who was unable to finish from close in when he chose the wrong club, using a wedge instead of a putter. 4 mins from time St Francis were inches over with a screamer from 25 yards. A minute later, it was the ever-dangerous Conran who skinned the skilful Saints full back Lukus Maher who could only clip his ankles and concede a penalty, no debate on that one. Up stepped Gavin Balfe for what had to be the winner 3 mins from time. Not tonight, McCormack dived to his right and saved well. Another chance fell to Chris Whelan but his excellent effort brought yet another great save from McCormack diving to his left hand bottom corner. And so we were to be treated to more great entertainment in 30 mins f extra time.

It was Paddy Dunne to the rescue early into extra time with a miraculous point blank stop on the line to maintain parity. We then had the goal of the match when Lewis Kilkenny linked up with Joey Crampton in an assault on the right flank, Lewis picked up the return, fed Cormac Suen, who put the ball into the 6 yard box where Gavin Balfe bravely got the final touch on the ball before steering it in off the helpless keeper. That looked a winner all day being a goal of such quality. Cormac was again in the thick of the action when he shot inches over from outside the box. The action continued, and this time it was St Francis who sent in a speculative cross that eluded the Celtic defence and Dylan Stack was on hand to force it over the line. Could we take any more drama? Yes we could. Dylan Malone picked out Sylviu Aghinita with a precision pass, and the winger launched his cross and lo and behold, we couldn’t believe it that in the dying seconds Celtic were to snatch victory with the cross that eluded the despairing dive of McCormack in the St Francis goal.

Yes, drama right up to the finish. There were unsurprisingly great celebrations by Celtic as they got over the line and secured the Cup Final place on 4th September. We thought hard after the game about a man of the match. It was a fierce difficult decision, but in the end, for his overall play and reading of the game, Philly Fitzpatrick was the man chosen. Having said that, his fellow-centre half could easily have got it as well. Shane Dunne had put in one of his best performances at full back. Well done to a dedicated group whose fitness stood them in good stead which probably was the difference between the teams at the finish. 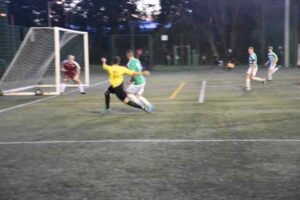