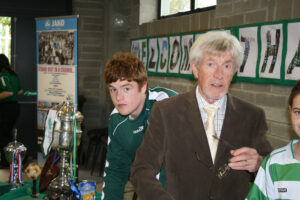 CCFC unveiled their wall plaque to their former stalwart Jack Moriarty on 29th January 2022. It commemorates the long service Jack gave toCastleknock Celtic. He was a man of great passion and love for the game, which was recalled by Club Chairman Brian Cummins in his tribute to Jack at the clubhouse in Porterstown Park. Jack was a man of vision, shown by his drive to build the clubhouse, and his commitment, exemplified each year by his organising the Open Days for new players. Brian reminded his audience that without Jack, many kids would never have enjoyed the beautiful game at all. Jack could have devoted his talents to any of the many sports he was attached to, but CCFC were very fortunate that it was they that he dedicated himself to. Jack’s memory will always be cherished in the hearts of Castleknock Celtic which this plaque commemorates, and we will continue to remember him in our thoughts and prayers. Ar Dheis Dé go raibh a anam dhílis.