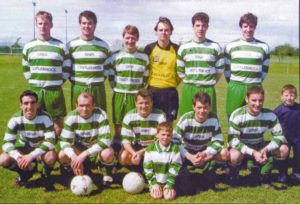 Founded in 1987, Celtic has grown from small beginnings to one of the biggest clubs in the country, having 46 teams, comprising 41 schoolboys/girls teams and 5 adult teams, looking after players of all standards, including DDSL Premier Division football, while the Children’s Academy FAI-qualified coaches  teach the club’s 4-7 year olds on Saturday mornings. The club also now competes in the Leinster Senior League’s Intermediate 1B Sunday division.

They moved to their home in Porterstown Park and there were great celebrations when  they built their own clubhouse in 2009, with former Minister for Finance, the late Brian Lenihan TD, performing the official opening with Sky Sports in attendance. They have four 11-a-side and four small-sided grass pitches,  their Laurel Lodge all weather, and they will have a full sized all weather pitch in Porterstown Park later in 2020, which in conjunction with a tartan athletics running track, will be part of the park’s development as a major sporting facility in Dublin 15.

The 5 adult teams are competing in the Leinster Senior League and Leinster Football League, while all the schoolboys/girls teams play in the Dublin District Schoolboys League.

The club’s roll of honour shows a steady flow of cup and league winners and runners-up over the years. The Football Committee is focusing on upgrading the coaching qualifications of all the managers and assistants across the club. With the infrastructure and coaching supports in place, the future looks very bright for Castleknock Celtic. click